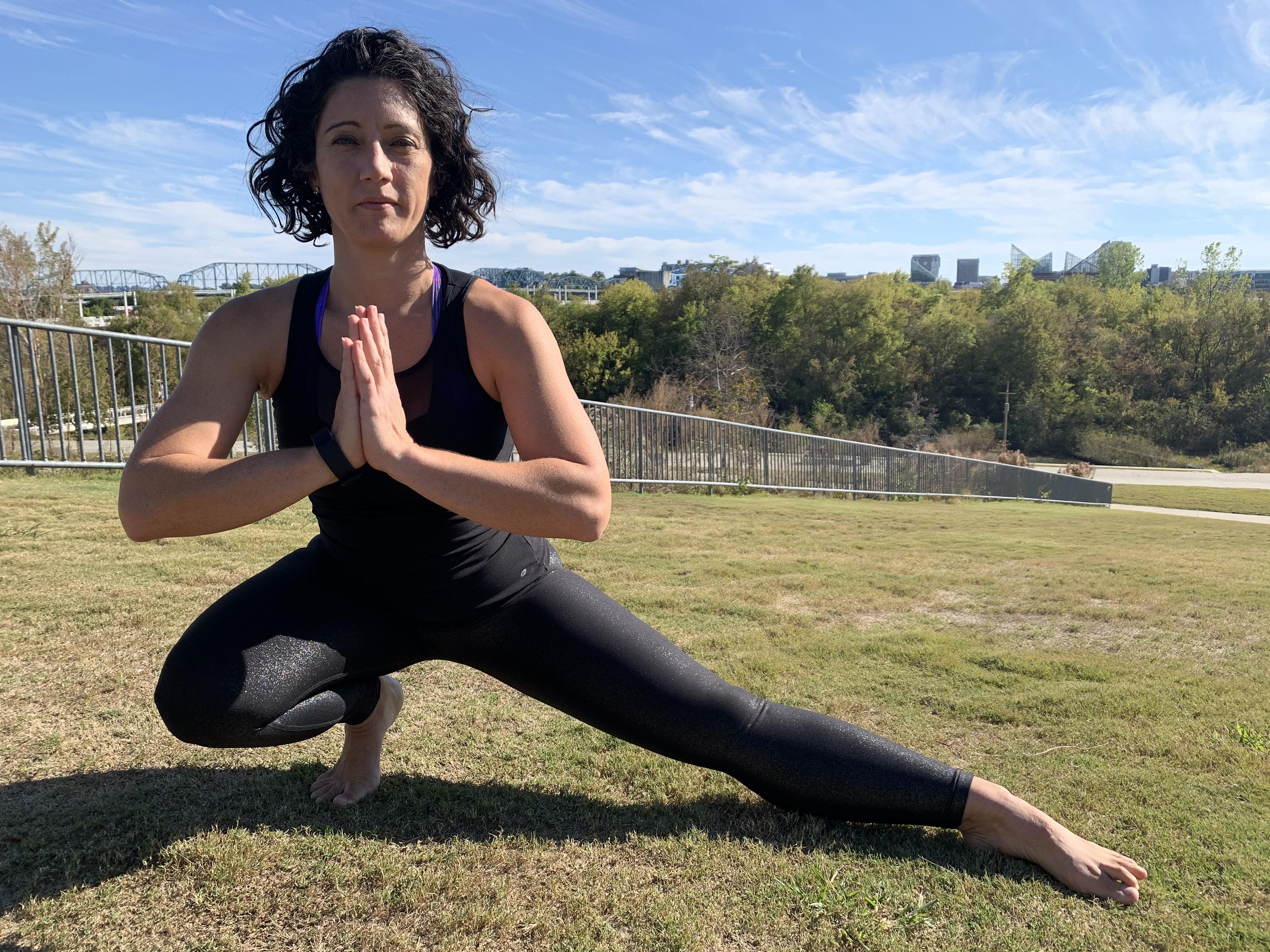 Yoga has been practiced for thousands of years. It has been written about for over 4 thousand years in ancient texts called the Vedas (and more.) However, it wasn’t until the late-mid 19th century that the yoga practice made its way west and into the United States.

Since it did originate in India, the language used to describe yoga is definitely not English. If you have ever learned another language, you know that, try as you might, some things can’t be translated exactly the same.

In Spanish you may say “Te Amo.”

Literally translated, that says, “you, I love”

The gist is the same, but due to different grammatical rules per language, some things can get lost in translation.

Sanskrit is the ancient language of India, and therefore yoga. Some believe it is the purest language. I am no linquist (heck, I can’t hear or pronounce the difference between Gym and Gem in English, so let’s just suffice it to say, Sanskrit is old, pretty, and in some ways sounds like some eastern Germanic and Russian area languages. The ancient Yogic (or Hindu) texts, including epic poems like the Mahabarata and The Ramayana were both written in Sanskrit originally.

Actually, they were spoken tales that were later recorded in Sanskrit.

Considering that the Mahabarata takes over 40 hours to listen to, could you imagine THAT as a memory assignment in school?

Since Yoga was created in a foreign country in a really old and foreign language, the words and terms sometimes used in a yoga class can seem overwhelming at first, sorta like that first foreign film you watched with the cute artsy guy in high school.

That’s why I wanted to write this one post with what I think are probably 3 of the most common Sanskrit terms you will hear in a yoga class, and what they mean. These 3 words are by no means exhaustive, nor have I tried to go super deep on each of their meanings. Shoot, if you’re reading this post, you’re probably still deciding what you think about this funny word, yoga. If I were to do a 4000 word essay on the meaning of these 3 words, you’d likely gloss over in 15 seconds. What you have here is a very easy (i hope) to understand break down of the 3 words you’re probably gonna hear at your first class. If there are more words you’re curious about, leave me a comment down below and I’ll see what I can do to answer them!

You’ve probably seen a few memes or shirts with plays on this word like “Nama stay in bed” (my personal favorite), or “llamastay” (with a cute llama in some yoga pose.) Where some people get very offended at these plays on words, I think they are funny (usually) and any time that it gets people talking about yoga in a positive way, I’m pretty excited about it.

Namaste is actually from a few root words in Sanskrit. Yoga Journal directly translates this word to, “I bow to you.”

If you go down the wiki rabbit hole on Namaste, you’ll find that it has been used in ancient Hindu texts for thousands of years, and that it generally is a reverential greeting. That’s why it is sometimes considered offensive to play on the word like above. It can sometimes be said to mean, “The light in me sees and honors the light in you.” Or “The divine in me sees and honors the divine in you.”

Often, this word is accompanied by hands in “prayer” at your heart. The hands in prayers is another Sanskrit word, a Mudra, with its own meaning we can cover in another post.

2). Savasana- the best and hardest pose of them all

Towards the end of a yoga class, you may hear your teacher say something like, “ok class, it’s time for Savasana (sometimes spelled shavasana).” Your first time around may have you looking around for cues. Savasana is the final resting pose and translates directly into “corpse pose.“

Savasana typically comes at the end of a yoga class and is meant for total relaxation, which is also why it is so incredibly hard because we are so hard wired to keep going going going.

You practice it by laying flat on your back, palms up and beside you. If this is too much for your back, you can put cushions or pillows under your knees. Basically, no excuses, get comfy.

Interestingly, in recent years, I learned of some debate in Ashtanga circles regarding this posture. Specifically, the question arose as to whether at the end of your practice you are in Savasana or just Resting Pose. I asked my teacher, Manju Jois, about this once and he laughed, rolled his eyes and said, “Yes, it is Savasana.” In fact, he followed that up with something about not listening to anyone that makes things more difficult than they need to be. Wiser words hardly ever spoken, right?

Savasana is the time in your practice that you get to truly lap up all the benefits of your practice. You sit in complete stillness for as long as you possibly can (some people believe a minimum of 7 minutes is required, but those people clearly don’t have children, full time jobs and / or a life for that matter….just kidding, sort of.) The longer you do stay in this pose, the juicier your practice will feel, so if you can, stay there that 7 minutes! Heck, if you fall asleep, I’m not judging you!

3). Drishti- Where You Look in a Yoga Class

Drishti is probably one of the deeper words in this beginner tutorial, with meanings not just in your yoga class, but in Ayurveda (Indian Medicine that is over 4000 years old), it has a meaning in theatre and so much more. In short, Drishti means gaze.

Where you look is very important in yoga. If you’re too busy looking at your neighbor, you can’t be focusing on your own breath and movements. Or, if you noticed the hot guy 3 rows over and you are trying to see if he’s got moves like the Yogi Mick Jagger. (I contemplated linking or calling out some modern day cute yogi, but I figured that would be weird..too bad Thor doesn’t do yoga in any of the Marvel Movies.)

Point is, at least for a beginner’s standpoint, the Drishti is where your gaze is during practice. There are many different yoga gazes, like on your hand (hastagra dishti) or at your belly button (Nabhi drishti). Usually, especially during flow or vinyasa style classes, a teacher will talk about your drishti mainly during balancing poses, because that’s when the stuff gets real and you’re just praying you won’t fall on your neighbor beside you ultimately knocking down cute Thor dude 3 rows over. (or that’s just my fear)

Several years ago while training with Manju, someone asked him about drishtis (because he rarely talks about them.) Manju came over to the U.S. with his father, Pattahbi Jois back in the early 70s to introduce Americans to Ashtanga Yoga thanks to David Williams. Manju says, when they first started teaching Americans, they just looked around at everybody, and that no one kept their eyes to themselves. Apparently, in India, people weren’t as preoccupied with what their neighbors Virabhadrasana (that is a Warrior Pose and a great subject for another post!) looked like. That was when his dad started teaching the Drishtis associated with the specific poses in Ashtanga…all because we Americans are nosy. (Insert sheepish look here, right?)

Ok, so now you’ve officially added 3 new words to your vocabulary (good job!) Granted, if you started going around telling folks namaste, they may look at you a little funny (outside of a yoga studio, of course.) I hope that learning about Namaste, Savasana, and Drishti helps you feel more comfortable in your next yoga class. If you’re interested in learning a bit more about yoga and the physical as well as philosophical aspects of it, be sure to check out the Thrive Yoga and Wellness Youtube Channel, where we post 3-4 times each week on different things like tutorials, full sequences, philosophy, mythology–you name it! Be sure to subscribe!