How the Stories Behind the Poses Can Help Bring Your Physical Practice to Life. - Thrive Yoga and Wellness

How the Stories Behind the Poses Can Help Bring Your Physical Practice to Life.

Have you ever experienced inexplicable….feelings...in a yoga pose? I’m talking like, everything is fine, and then, BAM!!  Just like lightening striking, some pose comes up in the sequence you’re moving through and you all the sudden want to cry, or hit people?  (maybe I”m the only violent yogi --in frog pose at least.) 😳

I was leading a heated power class a few years ago (which, in case you were wondering, is my JAM)...I mean, I love ashtanga, and practice that 5-6 days a week, but my first love is Power Yoga. It’s what GOT me to practice yoga, so there’s this special golden spot in my heart for a good, strong heated power class….but I digress.

After a particularly challenging power class a few years ago, someone requested frog pose. Now, in case you were wondering, frog pose, of all the poses on the planet, has got to rank up there as my least favorite. Sure, there are other harder yoga poses, but frog--something about that pose, it sets my teeth on edge, makes my insides curl up in a tiny snake-like ball ready to strike like the nasty cobra. I do not like that pose.

Since it was a special request, and since I like to accommodate my wonderful students, I said, well, OK. (because you know I’m probably not going to willingly offer a frog pose in a yoga class without being prompted by a student.) 😄 I went ahead and cued a frog pose. We had space, so we lined up on the wall, got our feet flat on the wall, made the 90, 90, 90 with the ankles, knees, and hips and then we sat there for what felt ever so close to FOREVER.

Really it was 3 minutes...if I’m being very liberal with my timing.

When the time was finally up to come out the only thing I could do was make a joke, and definitely explain how it was the yoga pose that made everyone made just then, not me… “I swear it was the yoga people!”

At the end of class, a beautiful yogi came up to me and said, well, I WAS going to stay for yin but I’m so worked up right now I don’t think I can!

We talked about the nervous system and how our bodies naturally hold things like stress and trauma, and yoga has an uncanny way of bringing that stuff to the surface. (something we talk about a lot in the Yoga Teacher Training Program here at Thrive.)

Fast forward a few years and I’m reading this cool book called, Downward Dogs and Warriors. It was recommended to me by a dear sweet yoga student and I have been devouring it! First of all, it’s perfect for a busy mom because the chapters are short. Secondly, it’s awesome because each chapter talks about the stories behind some of the most common yoga poses.

It is so much fun bringing even the most fundamental poses to life based on the mythological stories behind them! 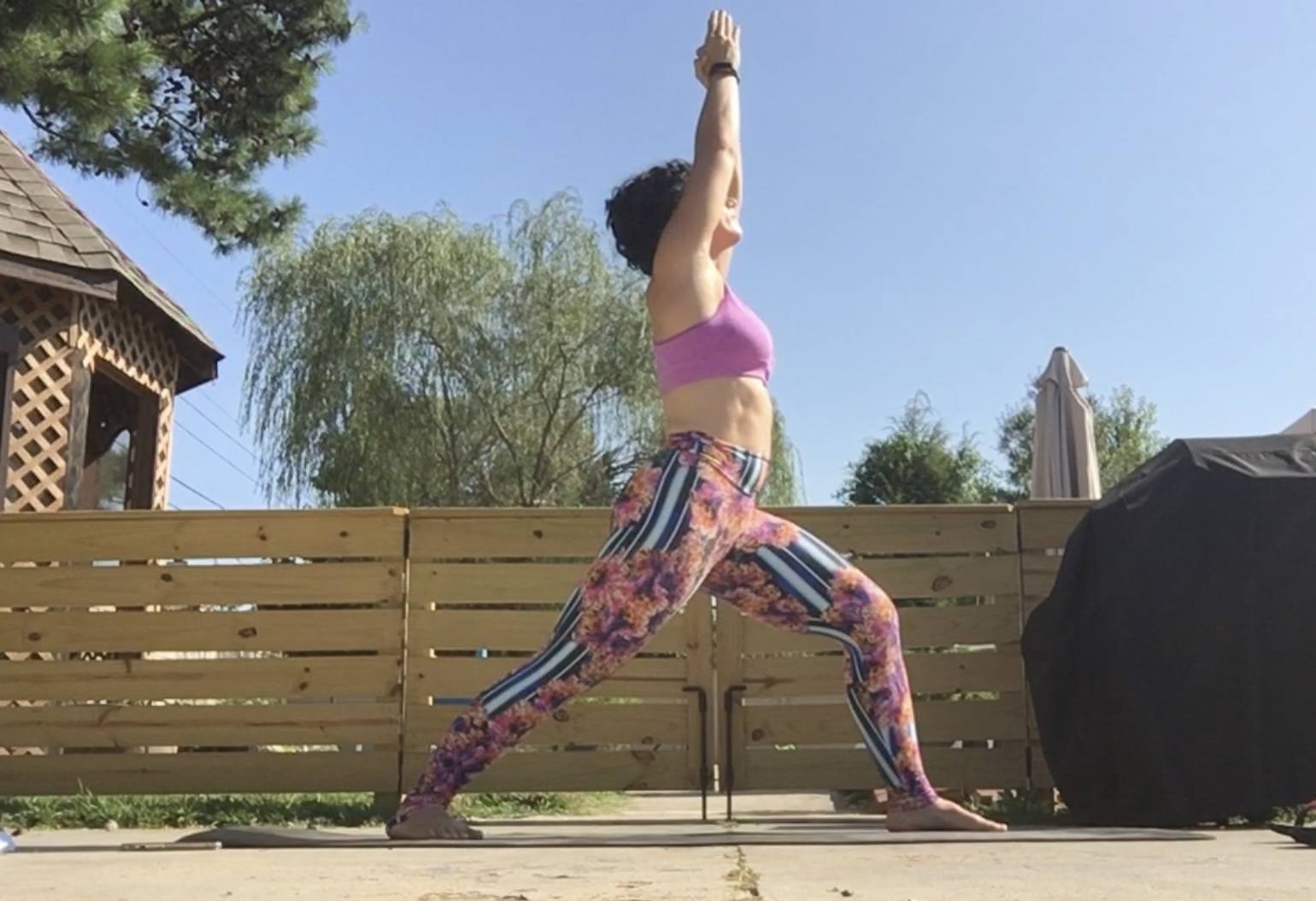 Did you know the story behind the warrior poses? Here’s the basic premise:

Long ago in a land far away, Shiva (this is a deity) was married to a woman named Sati. When he went to meet her family, he didn’t go in his magnificent, god-like form, he went basically as a homeless dude with dreads, and was accompanied by a band of ghouls and goblins. (I thought this story appropriate with Halloween coming next week.)  Needless to say, he didn’t make the best impression on Sati’s dear ole dad and mom. Even after turning into his glorious form, the parents were NOT impressed.

Fast forward some time, and Sati’s parents threw a big huge party. Sati and Shiva didn’t get invited. Sati believed it was an innocent mistake so she went to the party and Shiva stayed home (he must’ve known his first impression was a lasting one. Smart guy right there.) This party wasn’t just a shin dig, it was a big celebration and sacrifice. When Sati got there, she realized it had NOT been a mistake, she was not welcome. To make matters worse, she saw that the party that her parents were throwing were not true sacrificial shindigs, they were flaunting their wealth. Sati, in despair, threw herself in the fire, becoming the ultimate sacrifice.

Shiva finds out about the loss of his beloved and gets so mad, that a hair falls off his head and hits the ground. From it, a warrior, Virabhadrasana, springs forth. This warrior kills everyone at the party in a fit of rage and despair as Shiva mourns the loss of his wife.

This is a pretty sad and morbid tale, but it’s also pretty awesome! Think about it. Have you ever had some strong emotions come up in your warrior poses? I mean, I’ve gotten pretty annoyed at the 15th breath in a warrior 2, or, heaven forbid transitioning from Warrior 1 to Warrior 3. Those are strong, powerful postures. They require a lot of strength, skill, focus, attention (and of course flexibility.) This is the consummate description of a warrior, right?

I also love this story because it sorta makes it “ok” to get fired up in the warrior poses. It “explains” why you may experience these strong emotions while breathing in the postures.

The next time you’re in a practice and your emotions flare up, I invite you to explore those emotions, to try to find out what’s down there at the roots of them and then to just breathe.

Don’t forget, even if you’re not in Chattanooga, Tn, you can still come practice with me! Just check out Thrive Online. You can get access to a growing library of yoga inspired workouts, live weekly interactive virtual yoga inspired classes, and even direct access to private sessions virtually. I can’t wait to see you inside the community!